At the Table with Jesus​ 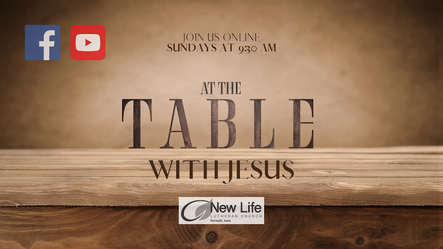 “Made Known in the Breaking of the Bread”
Note to readers:  During this series, we will read the entire gospel of Luke. To reach that goal, some daily readings are longer than usual. Mondays will highlight the “meal” passage from the previous Sunday’s sermon. Tuesdays through Saturdays will cover the rest of the gospel. Have an extra cup of coffee, or maybe use your lunch break—make the time to read the whole gospel with us.

News no one was expecting
Monday, May 25, 2020
​Luke 24:1-12 (read text here)
The loyal women who’d seen where Jesus’ body was laid (Luke 23:55) went back “very early in the morning on the first day of the week.” They didn’t go to worship, but to finish getting his dead body ready for permanent burial. The body wasn’t there. But even when the women reported that two men in gleaming clothing had asked, “Why do you look for the living among the dead?” their report “struck the apostles as nonsense.” None of them expected what happened on Easter. When Jesus raised Lazarus from the dead, mourners had wrapped the body in typical grave cloths. “Jesus said to them, ‘Untie him’” (John 11:44). When Peter peered into Jesus’ empty tomb, “he saw only the linen cloth.” Grave robbers would never have taken time to unwrap the body and leave the cloth. One sign that Jesus’ resurrection was qualitatively unique was that no one had to untie him. That resurrection changed everything for Peter. What effect has it had on you?
Author Phillip Yancey said the gospels’ honesty showed in how they told of the resurrection: “Accounts of the discovery of the empty tomb sound breathless and fragmentary....the early reports seem wispy, mysterious, confused. Surely conspirators could have done a neater job of depicting what they would later claim to be the hinge event of history.” * What made the gospel stories’ reliability vital to the apostles’ faith (and to yours) (cf. 1 Corinthians 15:14-19)?

Prayer: Lord Jesus, there was nothing ordinary or predictable about the stunning, world-changing day when, against all odds, you rose from the dead. Help me take in, and live out, all the ways that day changed everything about how I see the world. Amen.
* Phillip Yancey, The Jesus I Never Knew. (Grand Rapids, MI: Zondervan, 1995, p. 212.)
.

Puzzled followers' eyes opened
Tuesday, May 26, 2020
​Luke 24:13-32 (read text here)
Luke’s research (cf. Luke 1:1-3) found this unique resurrection day story. Unrecognized, Jesus joined two disciples discussing recent events. They were let down (“we had hoped”), sad, stunned that some women said Jesus’ body was not in the tomb. They didn’t say they believed it, but it puzzled them. Jesus explained “the things written about himself in all the scriptures” for them. As he blessed and broke bread, they identified him in a flash of insight and memory.
Scholar N. T. Wright noted, “It wasn’t simply...that they couldn’t recognize him. This is a strange feature of the resurrection stories, in Matthew (28:17) and John (20:14; 21:4, 12) as well as here....Jesus’ body...had been transformed. It was the same, yet different—a mystery we shall perhaps never unravel until we ourselves share the same risen life.” Does Easter make you long to share that risen life, to experience dimensions that for now remain mysterious to us? The two disciples may well have been husband and wife (cf. John 19:25; “Clopas” and “Cleopas” were likely the same person). They urged their road companion to stay with them, as a married couple would. If they hadn’t, they’d have missed the joy of recognizing the risen Jesus. How do you, individually and as a family, go about inviting Jesus into your life? How have you learned to recognize his presence amid everyday life’s pressures?

Prayer: Loving Lord, when I feel discouraged, disillusioned or disbelieving, please join me on the road. In times like these I especially need your living, loving presence setting my heart on fire. Amen.

"It's really me!"
Wednesday 5.27.20
​Luke 24:33-43  (read text here)
After meeting the risen Christ at Emmaus, the two disciples rushed to share the news with the others. As they were speaking, Jesus himself appeared. Luke, a first-century physician (cf. Colossians 4:14) reported the details that showed Jesus was no ghost, but fully physically alive. “24:39 Touch me. Many ancients believed in a shadowy afterlife; such shadows could not be grasped with the hands. 24:43 he took it and ate it. Many Jewish sources doubted that angels ate human food.” *
Jesus greeted his followers characteristically: “Peace be with you” (in Aramaic, shalom). “This greeting constituted an implicit prayer to God for the well-being of the person addressed.” ** What choices and disciplines have you found that allow you to claim Jesus’ peace for yourself? How can you apply that peace especially to the areas of life right now where fear and anxiety abound?
Pastor Bruce Larson wrote that Luke was “a Greek familiar with the Greek philosophy that the body and its appetites were evil. The soul and mind were good. The Greeks believed that in death the mind and spirit were freed from their bondage to the body....Luke, in spite of his Greek background, underscored the Hebrew theology...of the unity of body, mind, and soul.” * That’s why the Apostles Creed said, “I believe in the resurrection of the body.” Do you believe in that, and count on it?

"You are witnesses"
Thursday 5.28.20
​Luke 24:44-49 (read text here)
As he did on the road to Emmaus, Jesus explained the Scriptures to all the disciples. He taught them to reflect on the big picture of Israel’s history from Moses to the Psalms, to see that in the Christ (anointed one) there is salvation and justice. That was more than just information. He commissioned them to share his message of repentance and forgiveness of sins. “You are witnesses,” he said, promising that God’s power would help them spread his message to all nations.
Closed minds had kept Jerusalem’s leaders from accepting Jesus. The resurrection called on even Jesus' followers to rethink some of their assumptions. In verse 45, Luke used a great phrase: “He opened their minds to understand the scriptures.” Have you ever experienced this kind of “opening” in your Bible study? How can you create space for Jesus to open your mind to more fully understand him and his message?
Your personal story of a changed heart and life is powerful to the non-religious and nominally religious people you interact with wherever you live, work or play. You are a disciple, and like the first disciples, are a witness to God’s life-changing work through Jesus Christ. In what ways can you share your personal story of a changed heart and life with those who know you?

Prayer: God, keep me alert for chances to faithfully share your story. Give me courage when afraid, confidence when unsure, passion when indifferent. Help me share my personal story of a changed heart and life. Amen.

Luke didn’t write one book, but two. Jesus’ story continued directly into “volume 2,” the book of Acts. Jesus charged his followers to witness to him, but not using just their own courage or cleverness. They were to wait for the Holy Spirit’s power. Jesus’ “marching orders” were clear, but they must have sounded breathtaking and daunting to the little company of disciples. They’re still our orders, and still breathtaking: “make disciples of all nations....to the end of the earth.”
Surely the creator God could have written Jesus’ story in the clouds or spoken it from the skies. But God’s divine wisdom made people the primary means to carry out the mission: “You will be my witnesses.” Whose witness has shaped your life? In what ways have you been able to live out Jesus' commission to be one of his witnesses? How did Jesus’ vision make it vital for his family of believers to always keep a mission-driven, outward focus for their life together?
Jesus ordered his disciples “not to leave Jerusalem but to wait for what the Father had promised.” We Americans are often driven and impatient. Has it ever been hard for you to remember that Jesus told you, too, not to try to do important work for him on your own, without God’s power? How could “going it alone” hinder, not advance, God’s mission? Hinder your spiritual growth?

Prayer: Jesus, I love the audacity of telling 120 people in a small Roman province to reach “to the end of the earth.” I love the Holy Spirit’s power that keeps that mission moving. Fill me with that vision and that power. Amen.

​Not an end - but a beginning
Saturday 5.30.20
​Acts 1:9-14
(read text here)
Luke wanted Theophilus (Luke 1:1-4) and all other readers to know that Jesus’ story didn’t end in Jerusalem with the cross and the resurrection, or even the ascension. The risen Jesus told his followers that his saving work would go on through the rest of human history and into eternity. As the risen Lord left earth, two men in white said this was not the end of Jesus’ story—he would return. His followers devoted themselves to prayer to prepare for the huge task that now lay before them. This is the last passage in the Bible that mentioned Mary, Jesus’ mother. How lovely that this final mention showed her in a circle of disciples devoted to prayer!
Verse 14 is like the first note of a theme that runs through the whole story of the early Christians in Acts: “The spirit of unity and the practice of prayer are major features of community life (cf. Acts 2:1, 42-44; 3:1; 4:23-32; 6:6; 13:1-3; 16:13, 16; 20:36-37; 21:5).” Some of this group had argued about which of them would be the greatest at the Last Supper (cf. Luke 22:24), and they would have disagreements in the years ahead (e.g. Acts 15). What united them in Acts 1? What do you think Mary, the eleven apostles (sadly, Judas was no longer with them), Jesus’ brothers and the other women would have prayed about? We need that prayerful, worshipful unity to carry out the mission Jesus gave us as much as they did. In what ways can you cultivate a spirit of unity, even amid occasional differences of opinion or approach, with those who join you in serving God?

Prayer: Lord Jesus, I get so busy, devoted to so many things. Remind me, at least five times a day, how important it is that I devote myself to prayer. Help me keep my connection with you living and active. Amen.