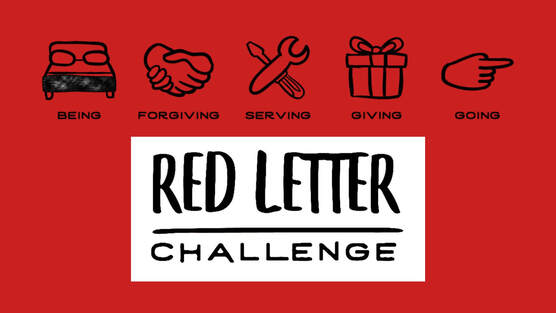 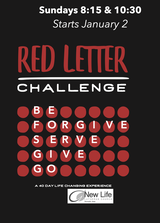 Come and See
Week 1: John 1:35-42
The next day John again was standing with two of his disciples, and as he watched Jesus walk by, he exclaimed, "Look, here is the Lamb of God!"
The two disciples heard him say this, and they followed Jesus. When Jesus turned and saw them following, he said to them, "What are you looking for?" They said to him, "Rabbi" (which translated means Teacher), "where are you staying?" He said to them, "Come and see." They came and saw where he was staying, and they
remained with him that day. It was about four o'clock in the afternoon. One of the two who heard John speak and followed him was Andrew, Simon Peter's brother. "He first found his brother Simon and said to him, "We have found the Messiah" (which is translated Anointed). He brought Simon to Jesus, who looked at him and said
"You are Simon son of John. You are to be called Cephas" (which is translated Peter)

Being
January 9 Week 2:  Matthew 11:25-30
At that time Jesus said, “I thank you, Father, Lord of heaven and earth, because you have hidden these things from the wise and the intelligent and have revealed them to infants; yes, Father, for such was your gracious will. All things have been handed over to me by my Father; and no one knows the Son except the Father, and no one knows the Father except the Son and anyone to whom the Son chooses to reveal him. “Come to me, all you that are weary and are carrying heavy burdens, and I will give you rest. Take my yoke upon you, and learn from me; for I am gentle and humble in heart, and you will find rest for your souls. For my yoke is easy, and my burden is light.”

Forgiving
January 16 Week 3:  John 8:11
Then each of them went home, while Jesus went to the Mount of Olives. Early in the morning he came again to the temple. All the people came to him and he sat down and began to teach them. The scribes and the Pharisees brought a woman who had been caught in adultery; and making her stand before all of them, they said to him, “Teacher, this woman was caught in the very act of committing adultery. Now in the law Moses commanded us to stone such women. Now what do you say?” They said this to test him, so that they might have some charge to bring against him. Jesus bent down and wrote with his finger on the ground. When they kept on questioning him, he straightened up and said to them, “Let anyone among you who is without sin be the first to throw a stone at her.” And once again he bent down and wrote on the ground. When they heard it, they went away, one by one, beginning with the elders; and Jesus was left alone with the woman standing before him. Jesus straightened up and said to her, “Woman, where are they? Has no one condemned you?” She said, “No one, sir.” And Jesus said, “Neither do I condemn you. Go your way, and from now on do not sin again.”

Serving
January 23 Week 4:  John 13:6-17
He came to Simon Peter, who said to him, ‘Lord, are you going to wash my feet?’ Jesus answered, ‘You do not know now what I am doing, but later you will understand.’ Peter said to him, ‘You will never wash my feet.’ Jesus answered, ‘Unless I wash you, you have no share with me.’ Simon Peter said to him, ‘Lord, not my feet only but also my hands and my head!’ Jesus said to him, ‘One who has bathed does not need to wash, except for the feet, but is entirely clean. And you are clean, though not all of you.’ For he knew who was to betray him; for this reason he said, ‘Not all of you are clean.’
After he had washed their feet, had put on his robe, and had returned to the table, he said to them, ‘Do you know what I have done to you? You call me Teacher and Lord—and you are right, for that is what I am. So if I, your Lord and Teacher, have washed your feet, you also ought to wash one another’s feet. For I have set you an example, that you also should do as I have done to you. Very truly, I tell you, servants are not greater than their master, nor are messengers greater than the one who sent them. If you know these things, you are blessed if you do them.
Revised Standard Version Bible, copyright © 1989 the Division of Christian Education of the National Council of the Churches of Christ in the United States of America. Used by permission. All rights reserved.